Las Vegas is about 125 miles from the Grand Canyon West Rim,which is the closest rim for tours.The helicopter flight from Las Vegas to the Grand Canyon West Rim takes 30-45 minutes.The helicopters that depart from Vegas don't go to the South Rim because it is too far away,however,you can get there by airplane in around an hour.There are also many characters in costume along the Strip and Fremont Street Experience located in downtown Vegas.They just dress up as such so they can earn money by means of mingling and taking photos with passersby and tourists.If you take a photo with them and do not give them a tip,they can become rude and behave in an unpleasant manner though you should not be obliged to do so.

Do you notice the guys standing along Las Vegas Boulevard who snap cards and distribute fliers to promote personal entertainers and strip clubs?There are complaints that these fliers are not only obscene,but cause litter and canvassers block the path of pedestrians,but when you ignore them,they won't force themselves.

The Las Vegas mega resorts are actually larger than they appear to be.It might take about half a mile just to go to the pool,buffet table,showroom or self-parking garage to get to your car.

Do you need Internet access whenever you are in Vegas?All rooms of the Venetian comes with a printer and fax machine,while the Cosmopolitan of Las Vegas has technical staff to help their guests whenever they the have problems concerning their mobile device connection.There is free wireless internet access in majority of bars,restaurants and coffee shops like Starbucks,which has some branches in downtown Las Vegas and on the Strip.

A lot of the Canyon tours depart from Vegas,so you can spend a few days enjoying the shows and fun activities there before and after your tour.Since these tours are so popular over Spring Break,be sure to book your tour in advance so the one you want to take isn't sold out by the time you buy your tickets. 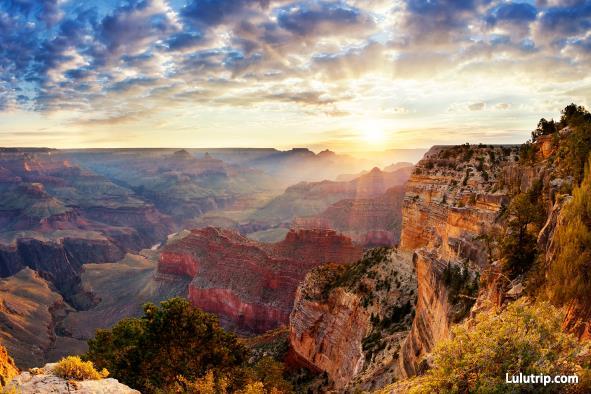 It is a massive glass platform that hangs beyond the edge of the rim so you can look down to the Canyon floor.It's exhilarating to stand 4000 feet above the bottom of the Canyon,and you'll have an impressive view.

When you tour the South Rim and depart from Vegas on an airplane,you can transfer to a helicopter once you get to the rim for a tour of the most scenic portion of the National Park.When choosing your South Rim helicopter tour,be sure to book the one that gives you 50 minutes of air time so you can see the North Rim,South Rim,and all of the park over to the eastern border.There is also a 30-minute flight available that costs less and covers the part of the Canyon between the North and South Rims.